Guitar exercises and licks and shit

The good old pentatonic scale and how to apply some different ideas.

So, I’m pretty sure you all are already familiar with the pentatonic scale, as it usually is the first scale any guitar player (or at least any rock guitarist) learns. It’s a very nice, easy to use scale for soloing, but it can get pretty boring pretty damn fast, and if you are only using the basic pentatonic boxes it can be pretty damn hard to shred on as well, unless you have a god-like right hand technique or you are Zakk Wylde. Or both.

So, let’s see what we can do with it shall we?

Here we have our basic E-minor pentatonic “box” shape on the 12th fret:

Probably the most used scale and box in all of rock soloing :)

Here we have the same pentatonic scale but starting on the minor 3rd, played on the 15th position:

You are probably familiar with this “box” as well.

NOW, at least my right hand technique doesn’t really allow me to blast through these shapes at warp speed, which -let’s face it- is shitloads of fun sometimes. So, how do we make this more “shred-friendly”?

I’ve talked about 3-note per string playing before, and to quite an extent if I recall correctly. It is a huge part of my playing, and I know I’m not the only one. I just always found it a bit hard to apply to the basic pentatonic scale, as it will have pretty huge stretches and position shifts. Here’s something in A-minor to demonstrate what I mean: It’s pretty cool and doable, but not the easiest or the most interesting way to do it: 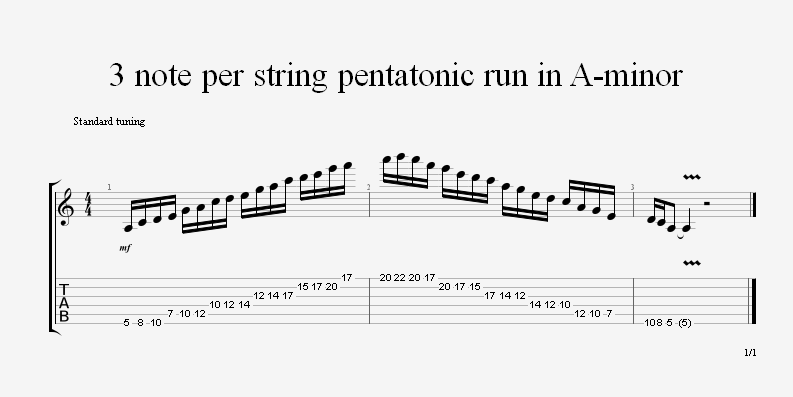 Now lately I have been dabbling with the subject and trying out some (for me) new approaches. If we were to combine the pentatonic boxes on the 12th and 15th positions that I showed earlier it would look like this:

You’ll notice that there are same notes repeating when changing the string while ascending or descending when using this shape. Now, I used to think of this as a problem, but recently while trying to work out a new kind of approach to the pentatonic scale and shapes I have started to realise that this is actually not a problem, but an opportunity: By utilising these combined box shapes we can come up with cool new runs and ideas that are a bit different from what you’d probably do if using just one of the boxes. 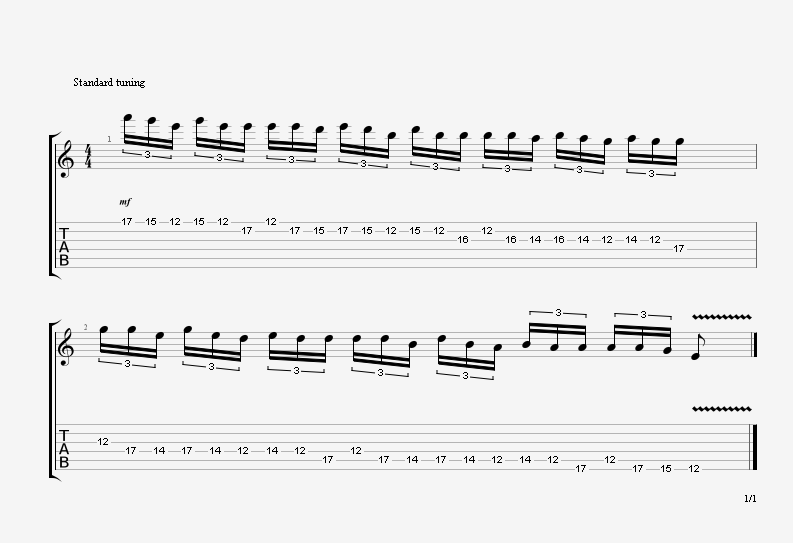 If you try playing this at a reasonable speed you’ll hear that the repeating notes don’t actually pose a problem at all, but actually add a nice twist to the otherwise run-of-the-mill pattern.

Here’s the same idea, but here we will first asked and then descent: 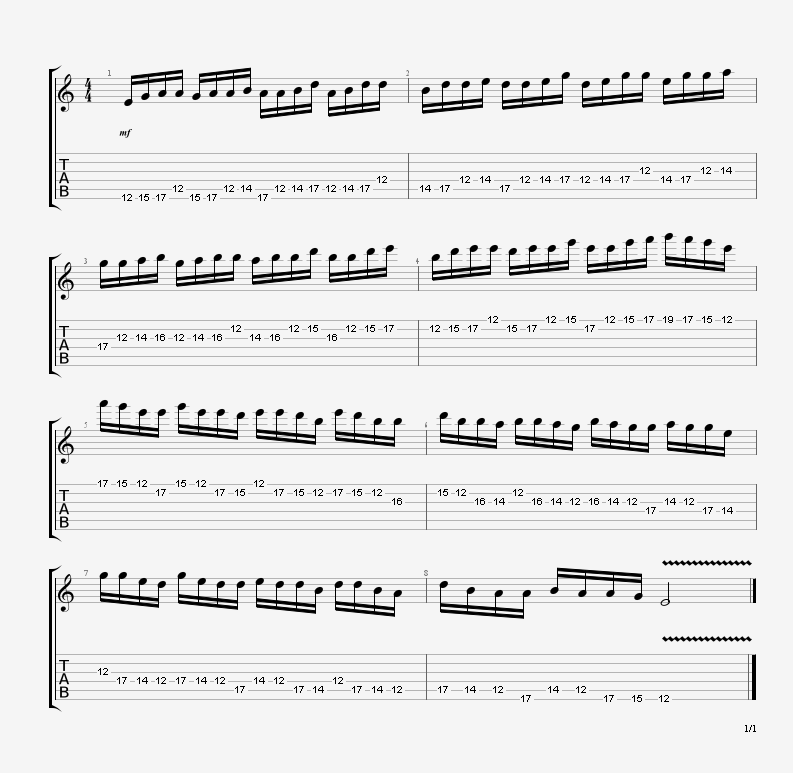 Now, so far we have just been playing the scale up and down, up and down, like boobs on a bus. But you can, and SHOULD, try to incorporate different kinds of patterns and sequences to ry and make things more interesting. Here’s one to get you started. It’s an eight note pattern using to strings at a time, and then we move the same pattern up, up again, and the same idea back down. Like this:

Ookey, I’m pretty sure you catch my drift here. So, let’s spice things up a bit shall we?

What if we want to utilise this 2 boxes combined- idea, but don’t want to have those pesky repeating notes? Well, here’s a concept I’ve been working on recently. For a lack of a better term I call it 3-1-3-1 and it goes like this, in D-minor: 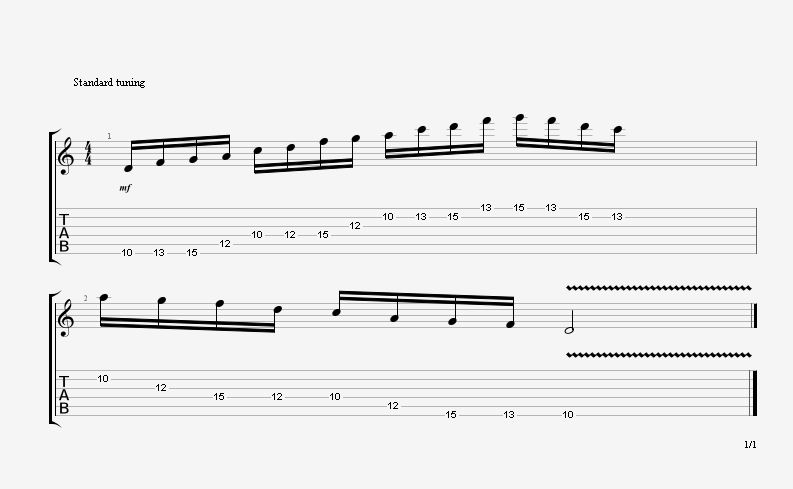 As you can see if you analyse the tablature, the name comes from the concept that we play our basic three notes per string, on the next string we only play one note, then three again, and then one again.
The beauty of this is that while we are still staying in one position, by using the bigger stretched and this pattern of strings we can actually play the straight forward pentatonic scale, and we can do it by using our traditional alternate picking, or if you’re into it you can also utilise economy picking.

You can also use this concept to throw in the occasional flatted fifth for that bluesier tone, if you feel like it: 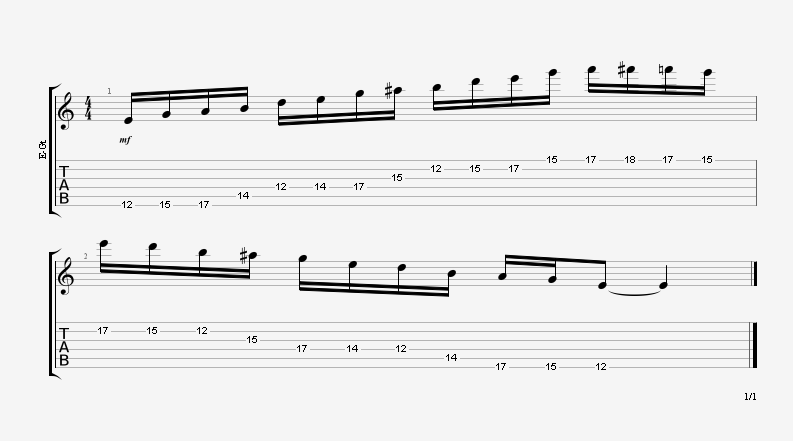 We can also still expand on the concept with different patterns, such as this one here: 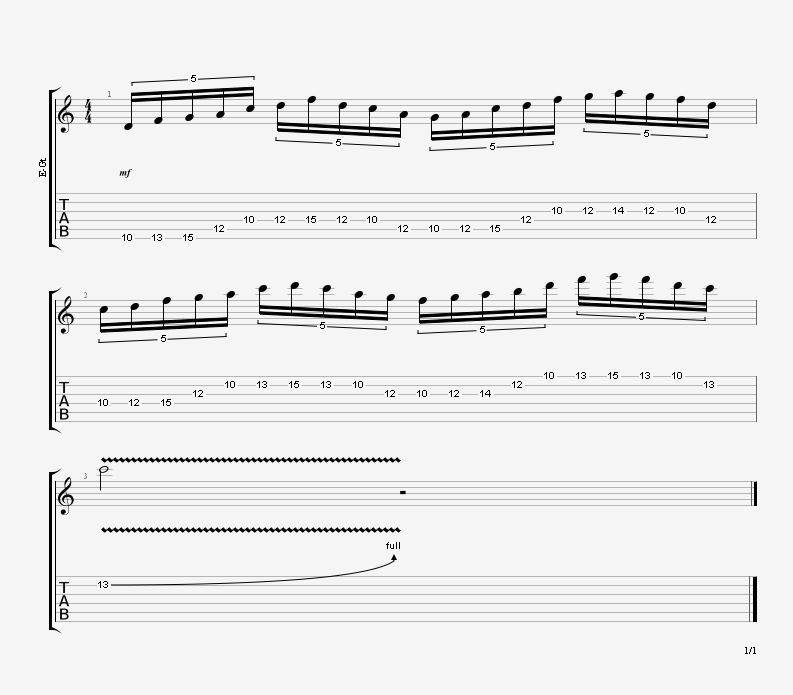 You’ll notice that the previous example uses quintuplets, a bit more unorthodox way of dividing the notes of the pattern than your traditional 8ths or 16ths or triplets. It just flows better with the pattern and makes it a bit more interesting I think.

So, there you have it, my recent musings on the pentatonic scale and how to expand from the traditional box shapes. I shall leave you with a lick that is basically combining most of the ideas presented before so you can get an idea what can be done when you utilise all these concepts in your playing: There's the fingerings I use displayed on top, in case you're having issues figuring out how the position transitions go. 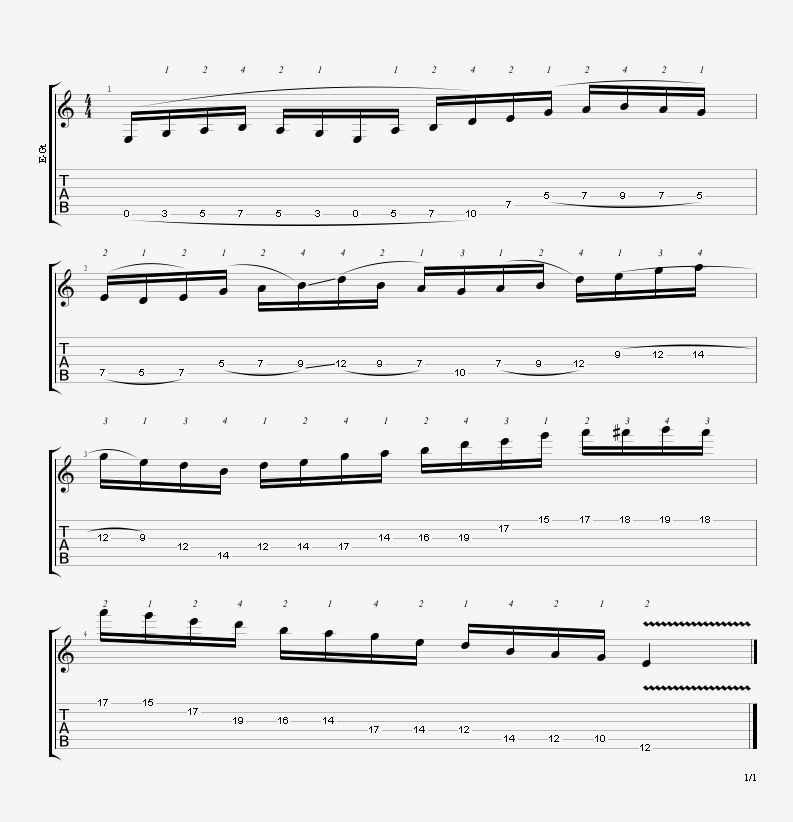 Stay tuned for another instalment of my incoherent ramblings about the wonderful world of guitar playing. Knowing me it should be online in a few years or so :) 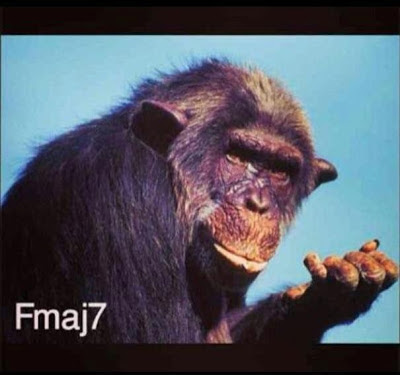 Now be warned, these are not very musical exercises, nor are they particularly fun to play, but if you are just starting to learn how to shred and shit, or if you just want to maintain your chops, these will work. Boring as hell though.

Start slowly, play the exercises up to the 12th fret or so and then back down to the first position. If your hand is tired let it rest for a while, then set your metronome around 3 clicks faster and repeat the procedure. Rinse and repeat. Rinse and repeat. Don't fool yourself by trying to play faster than you actually can, you're only cheating yourself and if you stick with the program the results will come. Kinda like going to the gym or jogging or whatnot.

So, first get and set your metronome. Really, I mean it. GET A METRONOME. None of these will do you that much good if you don't learn to play them clean and precisely. Set it up to a tempo that suits you, rather too slow than too fast to begin with, and then just start grinding this shit. There are numerous permutations of these exercises, and you can also come up with your own.

Here's the most basic chromatic exercise to build up your left and right hand technique: 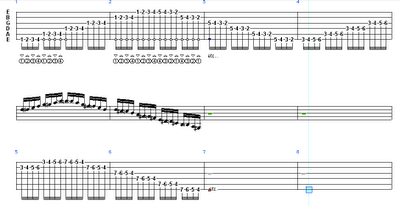 Notice that it is alternate picking all the way through. As I said before, and I WILL drill this into your skull even if it is the last thing I do: USE A METRONOME AND START SLOW! Play the exercise all the way up to twelfth position, or even higher if you feel like it, and then descent back to the first position.

This exercise is the first permutation, respectively ascending 1-2-3-4 and descending 4-3-2-1. Below I've listed all the permutations, so you can start to expand and don't get just the 1-2-3-4 thing into your muscle memory. I know, boring as hell, but this is workout you know :)

And here would be a 3-note per string chromatic exercise, I did not transcribe the most simple 1-2-3 one, as it is reaaally boring, so here's one that alternates between permutations. Please note that each finger of your fretting hand is assigned a specific fret, so that you always stay on the first position, until changing to second position on the bar 5. Again, do the whole lenghty craw crawl up to the twelfth fret and then descent back to square one: AND USE A FUCKING METRONOME!:)


An example of alternate picking in a context of an actual song: 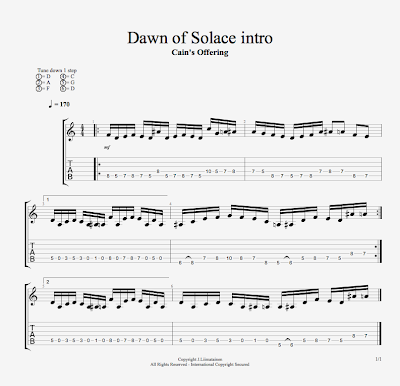 Disclaimer: I don't remember if the song is actually 170bpm, but it's up there somewhere. The original demo was 184bpm, but that was just sick:) 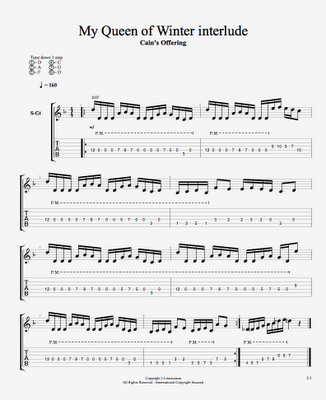 (Disclaimer: Again, not sure about the actual tempo on the album, and too lazy to check:)

As-per-requested, here's a part from "Morpheus in a Masquerade". I don't know where this should go regarding the guitar techniques, so I'll just add it here: 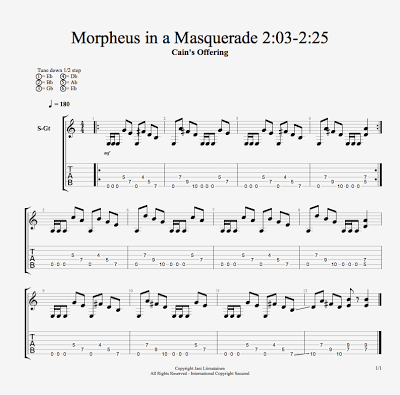 String skipping does not mean that you ladies should stop wearing your G-strings, noooo way:) In this context string skipping is a playing a passage that does not continue on the adjacent string, which is usually the case. With string skipping we can achieve wider, more unorthodox intervals when soloing, or writing a melody. It also is a very efficient way of playing arpeggios, especially if you are bored with sweep-picking the normal triads, or just want to dwell more into the zone of extended arpeggios by adding 7th (which jazz guys don't even consider an extended arpeggio yet, I know...), 9th, 11th, 13th etc.

I learned most of my string skipping stuff from listening and studying Paul Gilbert and John Petrucci. I'm sure there's ton of other guys doing great shit with this as well, but that's where I got most of it, so if this stuff looks and sounds a bit (or a lot) like them, there is a reason for it. 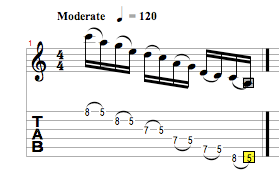 Now here's the same scale, but this time we involve some very basic string skipping. Notice how it immediately starts to sound more fresh, not only playing a descending scale anymore, even though the basic concept is very similar: 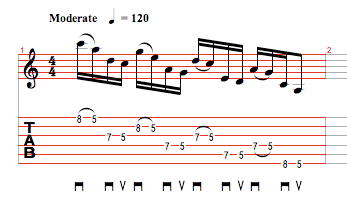 Here's an illustration of the basic concept, now just to give you a more practical and musical exercise, here's an excerpt of Pachelbel's Canon: 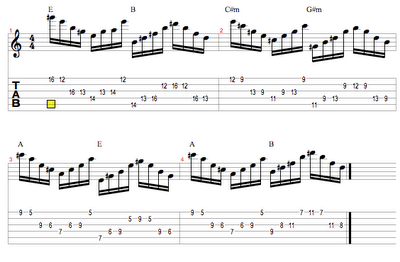 If you go alternate picking all the way it's a good picking exercise as well.

Here's a lick by Paul Gilbert, saw him use this one or something similar during his solo with Mr.Big in the late 80's/early 90's. The concept is very similar to that of the Canon:

Oh yeah, forgot to mention... USE A FUCKING METRONOME :)

Here's a string skipping version of an Em7 arpeggio, this time a legato version. It requires some stretching, but sounds really cool. I use this a lot myself: 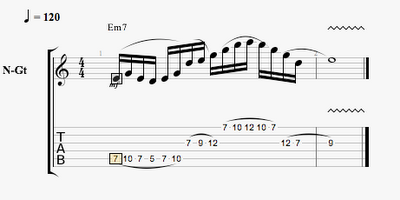 Here's an extended version of the previous one, this time an Em9 arpeggio. I add the 9th (F#) by tapping with the index finger of my right hand, then sliding the tapping hand to G (the 3rd) and back to F#:

If you don't know what sweep-picking is then I suggest you look it up, Google is your friend here:)

Here I've transcribed a sweep-picking part from a demonstration I did for Young Guitar back in the day, you can find a video of the demonstration here. This part starts at 1:36 on the video. 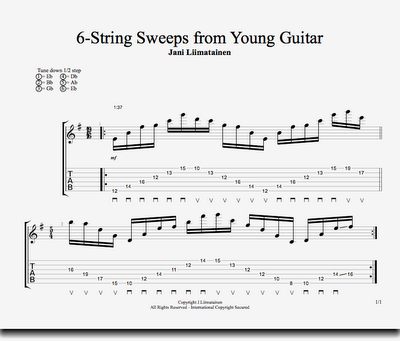 Here's the harmonised solo part from Sonata Arctica's "Silver Tongue" from the Winterheart's Guild album. I thought this might be an interesting piece to transcribe for you, as even though it is not overtly difficult it does utilize a lot of the techniques already discussed here, and also if you analyse the harmony you will notice that it's not just straight 3rds, or "homoterssi" as we say here, but alternates between a bunch of different harmonies. I've transcribed both guitar parts, so you can play either one or maybe find a friend who can play the harmony part. Whatever floats your boat :) 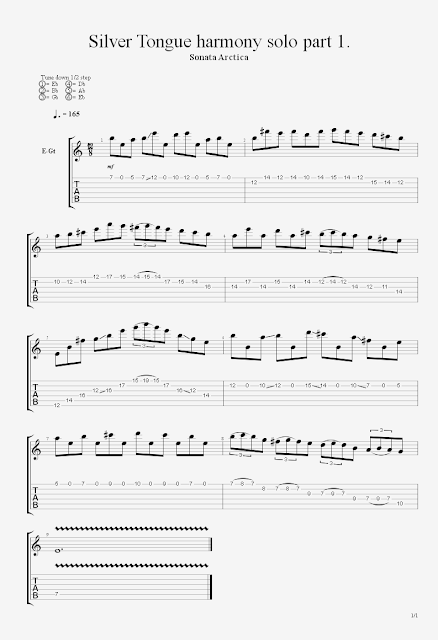 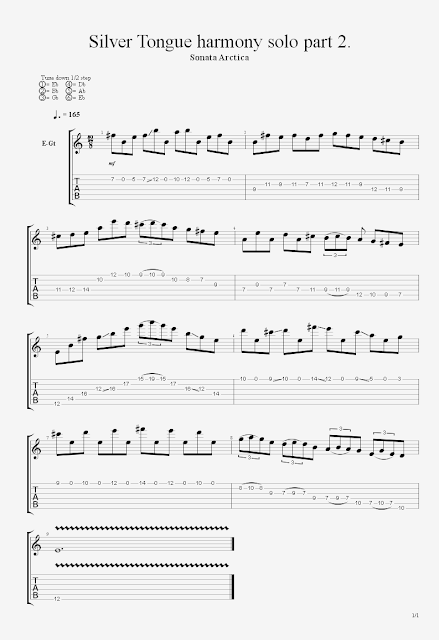 Someone asked about this, so I thought I'd transcribe it for the hell of it. Now that I've gone through the solo I have to say, even though it has some interesting ideas here and there, it's not one of my favorites. But if you get something out of it, more power to you. Anyway, here you go folks: 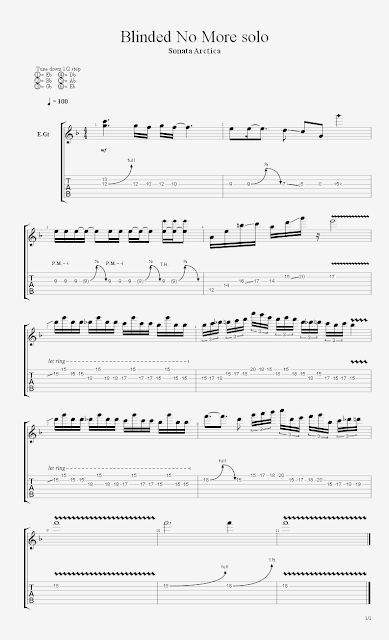