Bounces have been bounced

Finally, I must say. Took a break last night, as Mr.Vanhala called and asked if I'd go see Amorphis with him. Which I did. We put on our drinking glasses and many a beer met their demise. 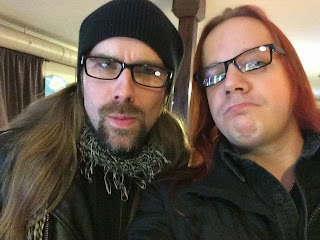 Amorphis was actually surprisingly good live, and it was great to hear them play some older stuff as well, such as this:

Tonight Mr. Vanhala is doing an acoustic show with Mr. Anssi Stenberg, I'll go there and once again drink many beers. Tomorrow it's time to drag my ass to Lappajärvi, the epic Cain's Offering vocal sessions are about to start :)
Posted by Jani Liimatainen at Saturday, November 29, 2014