I went running today, as I have done also yesterday and the day before that. I was meaning to have an off-day from exercise, but the weather was just too damn fine to pass on the opportunity. Thought I'd take it easy though and did my shorter route, which is pretty much exactly 5km. I was pretty confused when I arrived home and checked my Runmeter application, as it said 11,8km. Now, I KNOW I ran 5km, and there is no way in hell I could do almost 12km in 35 minutes. A quick look at the Runmeter map revealed that apparently I'm even tougher SOB than I thought. Apparently I can also walk on water. Step aside Jesus, kaupungissa on uusi sheriffi. 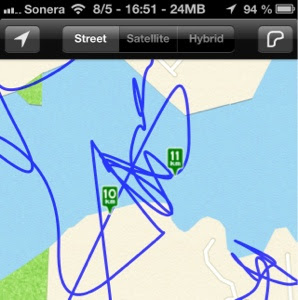 That being said, things are going fine. I've had a great week so far, been running every day, eating (fairly) healthy, and haven't had a sip of alcohol since last Thursday. If I'm turning into a better person you're all gonna be so disappointed, because that would mean that this sad excuse of a blog would turn out even more boring than it already is. Somehow I doubt that though... :)
Posted by Jani Liimatainen at Wednesday, May 08, 2013