Here we are, in the eastern Finland. Yesterday we played in Kuopio and it was fucking phenomenal again. Last time we played there was awesome as well, but we thought that it might've been just a glitch in the Matrix. But no, Kuopio just is that awesome for us.

Tonight is the second-to-last show of the winter with Timo, running low on shows for this winter. But we've done so many it's probably good to take a break and concentrate on other things. For Timo that will be Stratovarius and for me it'll be songwriting.

Should have a beer, change the strings from the guitar, have a shower... Just not sure in which order I should do these things. Maybe I'll start with the beer... 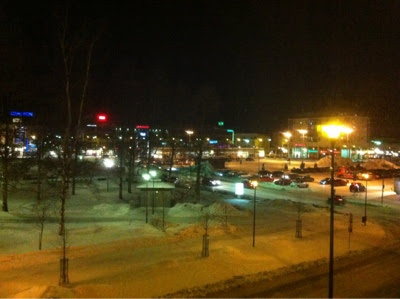 Joensuu. about to get rocked.
Posted by Jani Liimatainen at Saturday, March 02, 2013